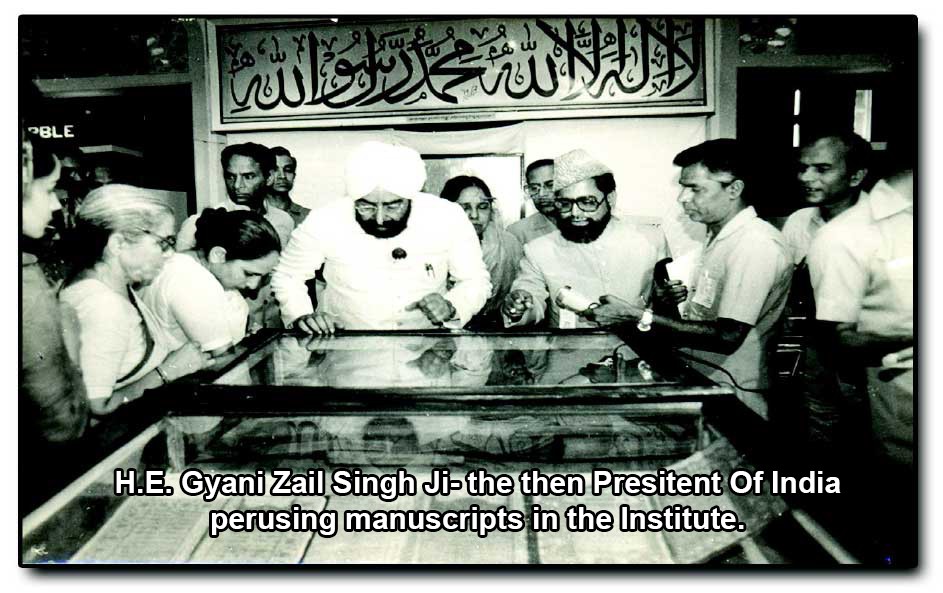 The Arabic and Persian Research Institute Tonk, designated lately as Maulana Abul Kalam Azad Arabic and Persian Research Institute steeped in a chequered history of crowning glory of the splendid past passed through various stages of exhilarating and climactic character tracing its archaic origin to the establishment of Tonk Distt. Branch office of the Rajasthan Oriental Research Institute in 1961 under the stewardship of a single man staff Shri Shaukat Ali Khan. This Distt. Branch office primarily commenced upon functioning with the transfer of 3064 manuscripts coupled with 133 rare books from the Saeedia Library which had been established by the erstwhile princely state of Tonk.

Encouraged by the unstinted efforts and indefatigable endeavourers of Shri Shaukat Ali Khan and wide ranging plans and projects and out grown output which brought home to the Government; this branch office was elevated by the state government to a full-fledged Institute for Arabic and Persian Research as an independent Directorate in December, 1978 by approving the sterling scheme of Shri Shaukat Ali Khan under his continued charge as Director.

The creation of the nascent Directorate under candid caption as Arabic and Persian Research Institute Tonk is an spiritual outcome transmitted of supremely sublime spiritual saint Hazrat Saulat of an exalted and unexcelled excellence and eminence who exultantly and profusely prayed and professedly predicted perceptively for its being Qasr-i -Ilm Arabic and Persian Research Institute. If we perceive characteristically and calculatingly its credit squarely goes to trinite titans  viz princely premier Shri Bhairon Singh Shaikhawat who patronized, Shri G.K. Bhanot (Former Chief Secretary) the ardent architect who prepotently created and the last but not the least Sahibzadah Shaukat Ali Khan - a pioneer-preceptor who prudently planned and prodigioiously reared, cultivated and professedly founded this  nascent Institute.

Esteemed M.M.K. Wali the former Lieut. Governor of Delhi and the ennobling Chairman of the High Powered Committee on Arabic and  Persian Research Institute by examining the potential progress and steadily soaring solidity and  growth of the Institute, exultantly observed "The Institute now has far out grown its parent (Rajasthan Oriental Research Institute). It has as of now a collection of 18829 Mss., and a large number of rare printed works and other documents and records in all numbering more than 90,000 with perhaps the richest collection of all on work, related to Sufism besides history and culture of various parts of present day Rajasthan. Some members of the committee who are Arabic and Persian Scholars of international repute testify to the fact that the Institute has already acquired a favourable ranking not only with in India but also in Arabic and Persian speaking countries. The committee is deeply appreciative of the continuing interest taken by the Government of Rajasthan and full support given by it to the development of the institute. The other factor in the remarkable growth of the Institution, whether in the initial stage as a Distt. Branch Office of Rajasthan Oriental Research Institute or later as an independent Institute, is the continued stewardship of Shri Shaukat Ali Khan. The committee can not overstate the single minded devotion and the unflagging zeal with which he has pursued the one single task of promoting the growth and literary utility of the Institute. He expanded the collection of mss. manifold by under taking extensive surveys and acquiring valuable mss. not only from various scattered collections in the libraries of other erstwhile princely states of Rajasthan but also from private sources. The process of acquisition still continues; substantial work of cataloguing and publication has been done, almost entirely by him. The Institute has been like a life's mission for him and he has pursued the cause of its advancement with a commitment so passionate and intense as one rarely comes across". Esteemed M.M.K. Wali further asserts, "Though Shri Shaukat Ali Khan is himself a member of the committee, the rest of the members of the committee would consider it unfair if they were not to place on record their deep appreciation of the invaluable contribution made by Shri Shaukat Ali to the growth and development of the Institute. They hope that the Institute will continue to benefit from the stewardship for many more years to come."

The Institute abounding in a tangible trove treasured in rare source material of abinding nature, encompasses multidisciplinary facets replete with orientalogy, Indology, historiography and Islamic Studies treating of the following oriental studies and Islamics of intrinsic value and verve.

The profusely ornamented and ornate manuscripts embellished with gold, rubies, emerald, pearls, sapphire and lapislazuli form an exquisitely treasured nucleus of fantastic nature. The antique, unique and solitary codices and princes, poineer's and pedagogue's autographs and emperors, courtiers and celebrities endorsed works par excellence are the masterpieces, the Institute boasts of owning. Scores of manuscripts on National Integration, Hindu Philosophy, Indian culture and on other fascinating fine arts such as decorative calligraphic panels, microscopic transcribed texts on rice, seeds and even on very small articles such as sesame, lentil bean and on even a single and small poppy seed invite imaze attract and spellbound the research scholars and tourists even commoners.

There is also a pile up record of historical documents designated as Munshi Khana-i-Huzuri comprising Farmain Kharait, documents and Amsila related to political and cultural history of Rajasthan with special reference to the Tonk State.

The Shariat record is another unique collection treating of Muslim polity based on Isalamic jurisprudence. The Tonk State was the only Muslim State which amassed a mass of important records dealing with social, cultural and economic aspects of the State in the context of Indian cultural heritage.

There is a also a very large body of translations and renditions done in India of Sanskrit works into Arabic and Persian. There is hardly any Sanskrit classic or philosophical work which has not been rendered into Arabic and Persian, including the Upnishads, Mahabharata, Ramayana, Lilawati, Panchtantra, Puranas,Bhagwat Gita etc. Indeed, in some cases the original Sanskrit versions from which these translations were made have become extinct but the translations are still extant. Infact, it was through such translations that the great store of knowledge and thought which the Sanskrit language represented went across to Persia and Arab and from Arab spread further to Europe.

Over all and above the rare of the rarest, there is a supremely magnificent and super humanly magnanimous masterpiece par excellence- masterly calligraphed Qura-an Sharif the biggest manuscript standing second to none in the world of 10.5x7.6 in size prestigiously prepared by Maulana Jameel Ahmed and Ghulam Ahmed another Haft-Qalam calligraphist of APRI according to the desire of Alhaj Muhammad Sher Khan- the prolific Milad Khwan and   preeminent philanthropist of Sawa, Chittorgarh (Rajasthan).

It is not only worth seeing but heart hankering and soal stirring as well.  There is also a treasure of unique and antique manuscripts of utilitarian interest not existing world over; to name a few at-Taisir, at-Talkhis, Al-Gharibain,  Ijazul Bayan Aghrazus-Siyasat, Zibut-Tawarikh, Tahrir -i-Uqlidas, Tarikh-i- Taj Ganj and Uyun-ush-Sharaf (reading five different subjects with the same text simultaneously).

The Prodigious Project of Digitization :-

The impearled centralization scheme of Shri Shaukat Ali Khan the primus Director resulting in a camouflaged corollary of characteristic  and charismatic Arabic and Persian Research Institute is the historical and enterprising achievement of the dignified dignitaries of doyen Sayyidain- Professor Noorul Hasan and Farooq Hasan-former Centre Education Minister and the latter State Education Minister. Again an epoch-making decision of archaic achievement was taken by Hon'ble Chief Minister Vashundra Raje Sindhia for the renovation and reorientation of Arabic & Persian Research Institute. This prodigious project of digitization of Rs. 24 crore submitted by my humble self which was approved munificently and magnanimously by her goodself.  It is her resoundingly history animating and adventurous achievement in rejuvenating and replenishing Arabic & Persian studies which revolutionized and revitalized the Institute as a restitute of exquisite action. The Rajasthan State comes out conspicuously and crowningly as the first state in establishing an international centre of Arabic & Persian studies and again it shines out as prime state replenishing and reorienting this unique Institute by occidentalized scheme of Digitization. This prodigious project too standsout primely an unparalleled and unrivalled project in India by constituting conspicuously a wide ranging  alma mater- a curious blend of  Archives, and manuscriptalogy, orientalogy and Indology.

The hypothetical imperative of Publication:-

The constant stream of publication pouring out from the Institute since very inception is a raisondetre professedly and fascinating fascicle of renditions, redactions and catalogues raissones. Consequent upon this gignatic venture the following publications have been brought out after painstaking  process of transliteration, renditions and redactions furnishing colophonic texts, superscribed writings on the fly leaves and interlinear spaces while deciphering properly and profusely the obsolete- calligraphy, chronograms and the taxing and time consuming legends of historical seal impression. 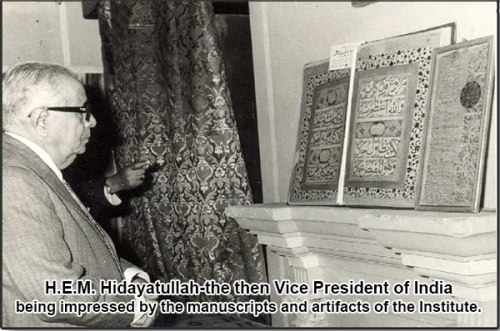 H.E.M. Hidayatullah-the then Vice President of India being impressed by the manuscripts and artifacts of the Institute.

This literary treasure of Arabic and Persian as well as Urdu belongs to the 5th century of the Hijra and onwards. It consists of the original works including edited and translated manuscripts and publications on more than 50 different subjects specifically

holyQur'an,Hadis, Fiqh,Tasawwuf, Philosophy, Sirat,History,Geography,Medicines, Astrology, Astronomy, Chemistry, Zoology, Botany, Geometry, Arithmetic, Literature andMalfuzat (writings) of the holy Saints etc. Besides these subjects, the Institute owns the Persian & Urdu translations of the works of Hindu Religion from Sanskrit origin as the translation of Ramayana, Mahabharat, Bhagwad Gita, Pothi Rohini, Naldamana, Lilawati etc. but the script of these works is of Persian as Emperor Akbar the great got these Sanskritworks ofHindu religion translated into Persian by his order in his reign.This invaluable literary collection owes its initial establishment to Yamin ud- Daulah Wazir ul Mulk the late Nawwab Muhammad Ali Khan – the third ruler of erstwhile Tonk State in the year 1867. In this way the travel of the Institute's treasure is 143 years till now. In the year 1946, Saeed udDaulah the lateNawwab Saadat AliKhan transferred it to the newly established Saeediyah Library which was known as the District Library,Tonk after the formation ofRajasthan.The manuscripts of the District Library were transferred in 1961 to Rajasthan Oriental Research Institute, Jodhpur by opening its branch at Tonk. Subsequently in 1973 the State Government established a separate Institute in the name of Arabic and Persian Research Centre which was further enriched by a historical decision of the Government through which important Arabic and Persian collections were transferred fromvarious libraries andmuseums to this Institute.