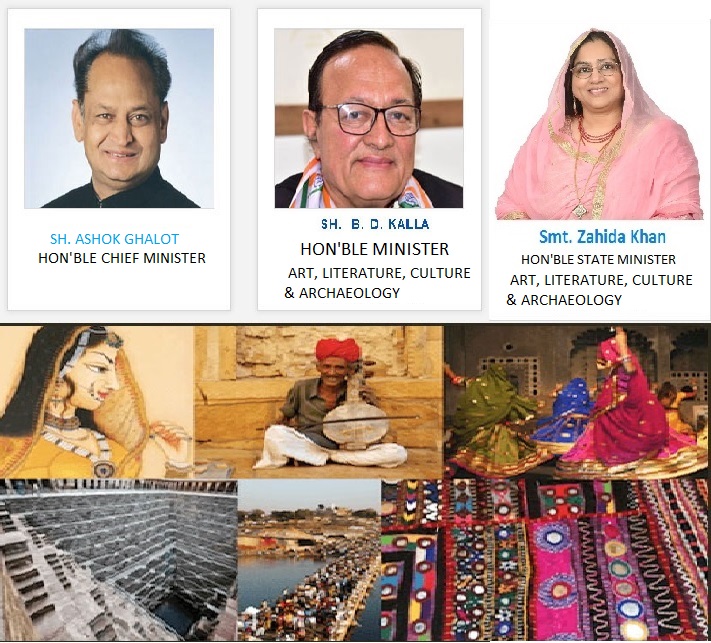 Art Literature and Culture plays an important role in the development of any State. Rajasthan being the largest State of India has a vast collections of Songs, Music, Dance, Theatre, Folk Tradition, Performing Arts, Rites and Rituals, Paintings and writings that are known as the “Intangible Culture Heritage” (ICH) of humanity. In order to preserve these elements, the Ministry of Art, Literature, Culture and Archaeology implements a number of Schemes and Programmes aimed at providing financial support to Individuals, Groups and Cultural Organisations engaged in performing visual and literary arts etc.

The State of Rajasthan is rich in Historical and Archaeological source material which is scattered all over the State throwing a flood of light on its ancient history and culture. Ministry of Art, Literature, Culture and Archaeology, Government of Rajasthan is working Whole-heartedly to conserve, promote and develop the State’s Art, Culture, Literature, Monuments and Heritage sites.

This Ministry is responsible for the protection, development and promotion of both tangible and intangible heritage and culture and also manages several knowledge resource centres. The Ministry takes care of all the protected monuments of the State through Archaeology and Museum Department and also promotes the museum movement in the country and majority of the important museums of the State are under its administrative control. The Ministry extends financial support to individuals, groups of individuals and cultural organisations engaged in performing visual and literary arts. Similarly the Ministry, under its various Linguistic and Cultural Academies, is engaged in recognising excellence in the field of Art, Literature and Culture by way of awards.

Major Activities of the Department in nutshell are as follows:

The Ministry of Art, Literature, Culture and Archaeology, Rajasthan functions through Four attached Directorates, Two Authorities, Four Institutions and Nine Academies as under –